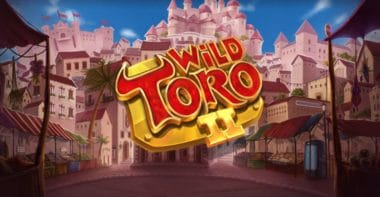 Wild Toro II will make people happy. Indeed this second opus from publisher ELK Studios will delight fans of the first. The Matador and the Taurus are still not on good terms and when they meet on your screen, the Toro Goes Berserk feature is triggered.

Let's start this slot machine review by telling you a bit about the different symbols and features present in the game.First of all, the symbol Silver Matador is a wild that moves on the grid, while the Golden Matador is a walking wild with a progressive multiplier. In the event that a Matador symbol is touched, the feature Expanding Matador Respins starts. During this, each Matador in sight adds an additional row of symbols increasing the playing area to 502 paylines or ways to win at most. The Matador symbols move from reel to reel from right to left generating a new spin with every step they take. In addition, with each step the Golden Matador takes, his multiplier increases by x1.

The bull is also a mobile wild on the grid and it also grants respins when it moves to the left reels of the slot machine. If Toro and the Matador are visible at the same time, the function Toro Goes Berserk is then triggered. When the bull charges the matador, he then leaves a trail of Wilds symbols behind him.

In the first game of Wild Toro, there were 4 different betting strategies. In Wild Toro II we find:

Since the first installment of Wild Toro, Elk has evolved a lot and developed many new skills in the igaming market. Graphics, mechanics and gameplay, Wild Toro II is much livelier than the first and the soundtrack really takes you to the Iberian Peninsula for some Spanish-themed action.

Wild Toro is certainly not as cult as the Gold slot machine series but with this new episode it has real weapons to stand out in the library of online casinos. Progressive multipliers add the finishing touches to a game that can technically produce much greater thrills and payouts than the first game.

The only flaw that we really noticed with Wild Toro II was its lower than average payout rate to players with 95.00%. Not enough to discourage most players but it is always good to note it. ELK Studios compensates by offering a maximum gain of x10,000 the maximum bet.

To sum up, Wild Toro 2 is a slot machine that will appeal to fans of the genre. It's not a revolution but its gameplay, atmosphere and potential are good. If you don't know the series, it's a safe bet that you might like to become a Big Winner Toreador.

Enjoy an exclusive video of the Wild Toro II slot machine created by game provider ELK Studios. With this video, discover the characteristics, volatility, number of paylines as well as the various bonuses and / or progressive jackpots of Wild Toro II. This youtube video shows a big win made by a player during the free spins (freespins) on the slot machine.

Discover the best slot machines as well as the latest news from ELK Studios. Take advantage of the features of each game and get ready to hit the jackpot.

Visit the Wild Toro II game page. This slot machine is accessible free of charge and without downloading in demo mode directly on your browser, for more convenience, activate full screen mode.

Go to the slots page of the game publisher ELK Studios ! Or consult the recommendations directly on the game page.