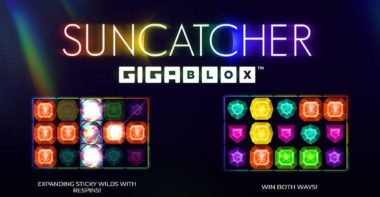 The Gigablox franchise started off with a bang with Hades, where the concept emerged as a chaotically unpredictable reel modifier. This is still the case in Suncatcher Gigablox, albeit on a much smaller scale. Everything is reduced this time around, including the earning potential which peaks at only x1,430 the stake. Everything is simple and basic in Suncatcher Gigablox be it graphics, effects, features and rules.

Gigablox Suncatcher occupies a well-defined niche, and although it is the most simplistic of the Gigablox line, it presents a distinctive experience compared to those that came before it. On the one hand, the Gigablox mechanic moves away from the spotlight to some extent, not dominating the reels as he has in the past. One reason is that Suncatcher only has 2 × 2 or 3 × 3 sized blocks, so there aren't any of the 4, 5 or 6 reel mega tiles seen previously. The two-way payment system continues to perform well with sticky wild respins, although after a while the lack of additional features weighs down the action. There isn't a lot of stimulation most of the time, and outside of the full grid Wilds there aren't many big wins either.

Suncatcher surprised us, as the previous three games were rich in graphics and contained an assortment of additional features. Who would have guessed that after the dangerous river lands of Gator Gold, Yggdrasil would have muted the game mechanics to design a Starburst 2?.0 ?

Enjoy an exclusive video of the Suncatcher Gigablox slot machine created by game provider Yggdrasil Gaming. Thanks to this video, discover the characteristics, the volatility, the number of paylines as well as the various bonuses and / or progressive jackpots of Suncatcher Gigablox. This youtube video shows a big win made by a player during the free spins (freespins) on the slot machine.

Discover the best slot machines as well as the latest news from Yggdrasil Gaming. Take advantage of the features of each game and get ready to hit the jackpot.

Go to the Suncatcher Gigablox game page. This slot machine is accessible free of charge and without downloading in demo mode directly on your browser, for more convenience, activate full screen mode.

Go to the slots page of the game publisher Yggdrasil Gaming ! Or consult the recommendations directly on the game page.