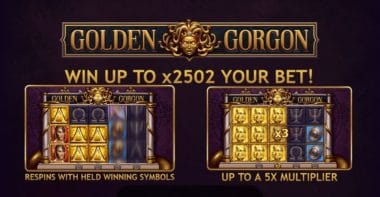 Just as Yggdrasil combined the two myths of Medusa and King Midas, they also combined features from the old games. The respins of Golden Gorgon are very similar to those of Jack Hammer from NetEnt and we find the respin of Arcane Gems from Quickspin.

Despite having a total of 25 paylines, Golden Gorgon offers a rather low potential for game wins with a maximum of x2,500 per bet. It might not be a catchy number in and of itself, but knowing that a three-symbol win could potentially escalate at this level increases the urge to give it a try.

Ultimately, Golden Gorgon is a straightforward game, which comes down to waiting for dead spins for the winning lines to hit and trigger the feature.The machine still gives the impression that Yggdrasil Gaming was not very inspired for the gameplay.

The slot machine is decent but far from spectacular.

Enjoy an exclusive video of the Golden Gorgon Slot Machine created by game provider Yggdrasil Gaming. Discover through this video the characteristics, volatility, number of paylines as well as the various bonuses and / or progressive jackpots of Golden Gorgon. This youtube video shows a big win made by a player during the free spins (freespins) on the slot machine.

Discover the best slot machines as well as the latest news from Yggdrasil Gaming. Take advantage of the features of each game and get ready to hit the jackpot.

Go to the Golden Gorgon game page. This slot machine is accessible free of charge and without downloading in demo mode directly on your browser, for more convenience, activate full screen mode.

Go to the slots page of the game publisher Yggdrasil Gaming ! Or consult the recommendations directly on the game page.