Who has never played Jetx on Cbet Where Aviator by Las Atlantis ? The least we can say today is that Crash games have been popular in online casinos for a few months. The igaming community loves it, and more and more providers are thinking of new crash games.

And today it's the turn of one of the biggest pillars of igaming to present their latest crash casino game: Evolution Gaming.

Evolution Gaming what is it ?

In the world of online casinos, there are several major players. We often talk to you about gaming sites, but today we're going to talk about game providers, and more specifically one of the market leaders: Evolution Gaming.

Basically those that we call publishers or providers are manufacturers of games of all kinds. Slot machines, Online Blackjack, Online Roulette and all the casino games that you can find at online casinos are designed and developed by providers.

Evolution Gaming has succeeded, in a few years, in completely differentiating itself from other developers. Indeed, unlike the competition, which mainly produces online slot machines, EG decided to specialize in a branch that was still little exploited at the time: live casino games or live casino games. The entertainment that Evolution offers are diverse but always have one thing in common: the presence of live dealers or entertainers. There are even animated games of chance like Crazy Time, Deal or No Deal or even Gonzo's Treasure Hunt.

Now, Evolution Gaming is one of the most recognized casino providers in the world. The Maltese publisher's games attract several thousand players every day, and gambling sites are now fighting for their license to operate.

The New Cash or Crash Game: How It Works ? 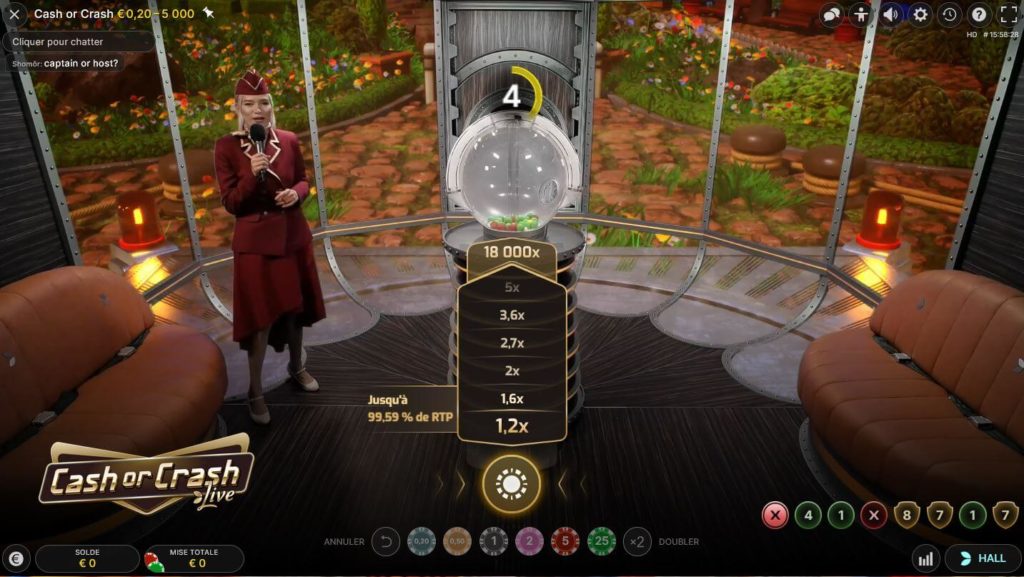 As we explained above, everything is in the title. Indeed, Cash or Crash is a crash type game like Jetx or Aviator for example. Those who are already familiar with this type of entertainment will find it very easy to understand Cash or Crash.

It all starts with a game host in an airship. The goal, as with the Jetx plane is to get the balloon up as high as possible. The higher it goes, the more money you get.

To bet, it's very simple. There is no side bet or special bet, here you just have to choose an amount between $ 0.20 and $ 5,000 and place it on the square provided in the center of the game. If the players wish, they can consult the previous games and results (This allows you to see what results have been done before, and potentially to see if betting on this round is interesting).

Cash or Crash: the ball draw 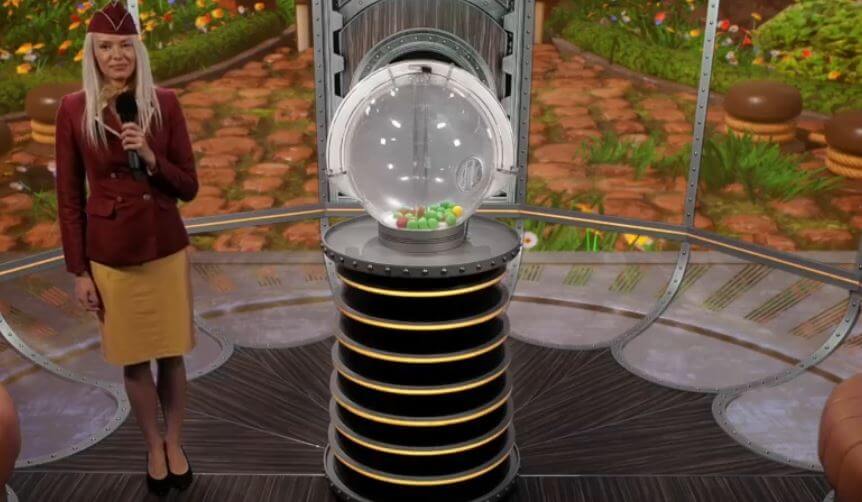 As you have probably noticed, there is an abacus in the center of the screen. Inside it are 2 different types of balls: the green ones, the red ones as well as a golden ball. In total the machine contains 28 balls, 19 green balls, 8 red balls and 1 golden ball.

At the end of each turn, a ball ends up in the center, and it came out through a tube which goes up.

If the out ball is green : this means that the airship will go up one floor, with all the players who have bet. The earnings will then go up one level for everyone.

If the out ball is Red : this means that it is the crash action. The game stops and the money put in by the players is lost (Unless the bettors have previously secured their winnings before the crash).

If the output ball is golden : unique, this ball increases future earnings and provides protection to players called bonus shield. This protects all bettors from the next falling red ball, and will have no effect. If a golden ball appears, continue the game until the next red ball, you do not risk anything.

On more classic Crash games like JetX and Aviator, the player has only two choices. Stay in the shuttle to try to have bigger wins or stop to secure the wins.

In the case of Cash or Crash, it is possible to establish more extensive strategies. Indeed, the player can choose at the end of each round (each time a ball is selected) between 3 possibilities:

Cash or Crash: the winnings

Who says new casino game also says new winnings for punters. We know how important it is for players to know the payout potential that a slot machine or live casino game can have. You can find all the information relating to Cash or Crash directly in the game menu (Help menu at the top right).

Each green ball in a row obtained during a game will increase the win multiplier. In addition, having the golden ball unlocks a new higher multiplier. here is the Cash or Crash payout table :

Level 20 is the last level. If you have reached it, all the green balls of the blender have fallen. If throughout the game you kept your winnings and the golden ball fell during the game, your winnings will be x50.000 your stake. If you had chosen to play $ 10 you will have won 500.000 $.

Which online casino to play Cash or Crash at ?

At the time of writing this article, the game Cash or Crash has just been released a few days ago. Therefore, it is still difficult to find a platform to play it. But don't worry, our experts tell you all about the reliable casinos that offer this novelty. Play Cash or Crash Now on : 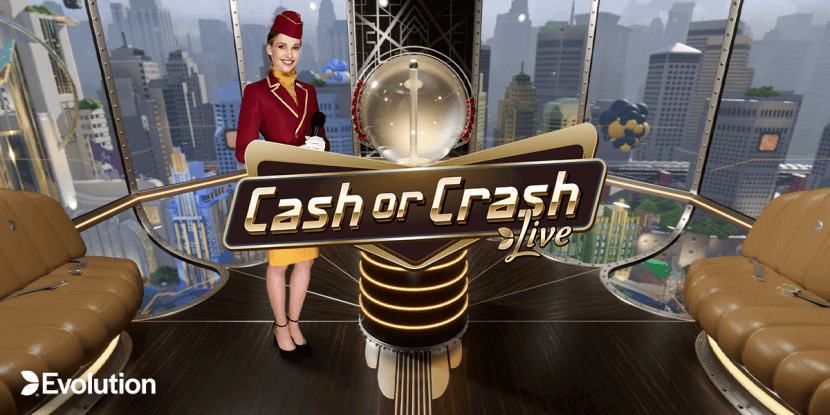 Evolution Gaming has accustomed its players to quality entertainment. Through the years, have not been able to see the greatest live casino classics like Megaball, Lightning Roulette or Crazy Time.

Aware of the success of crash games, Evolution has decided to take matters into its own hands. And it's a total success. Indeed, Cash or Crash is a very immersive and satisfying game. By mixing the festive atmosphere of Crazy Time with the concept of a crash game, Cash or Crash is a dose of adrenaline when the green balls follow one another. the RTP of the game is excellent ranging from 94.51% to 99.59% money returned to players.

In addition, the game includes very variable stakes (from $ 0.20 to $ 5,000) and is therefore suitable for all types of players. Whether you want to play on a small budget or with tens of thousands of euros, everything is possible in Cash or Crash. And the icing on the cake, a maximum earning potential of x50.000, you might as well say that this game will make more than one player dream.

In conclusion, if you enjoy the Crazy Time and the jovial atmosphere of Evolution Gaming's live casinos, you will undoubtedly be very excited about this new creation.

We couldn't conclude this Cash or Crash game review without telling you about the streamer from LetsGiveItASpin who performed amazingly on the new game from Evolution Gaming.

Indeed, after getting the golden ball and its shield from the start, the streamer chose several times to take half of these winnings to finally secure a sum of more than 34.000 euros. Something to dream of more than one player.